The Women Who Love Them 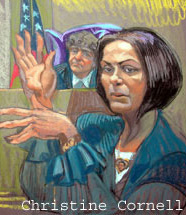 Not since wannabe Bonanno boss Carmine (Lilo) Galante was being chauffeured around by daughter Nina in the 1970's, has there been any serious talk about women playing key roles in the American Mafia. All talk ended when Galante was shot to death in July 1979 as he dined at an Italian restaurant in Bushwick, Brooklyn.

But women are often part of the gangland landscape. In the fall of 2007, for example, mob moll Linda Schiro was the linchpin of a sensational murder trial of an ex-FBI agent that ended midstream when she was discredited by 10-year-old tape recordings that put the lie to her courtroom testimony. Schiro was investigated for perjury charges, but never accused of a crime.