The nation's foremost EXPERT on the American Mafia

This Week in Gang Land

Five Years Later, He Faces The Music In The Pasquale's Rigoletto Sting Operation 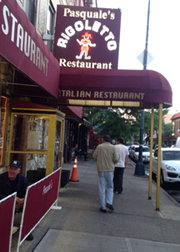 Three months ago, it looked like Laurence (Keith) Allen, the last defendant in the case of 46 mobsters and associates who were snared in an FBI sting at a popular Bronx Italian restaurant owned by a Genovese capo, had pulled off a crafty move that would save him a long stretch behind bars. The move seemed out of the playbook that Gambino mobster Charles Carneglia used after John Gotti won an acquittal of racketeering and murder back in 1987.

Not that Allen is in Carneglia's league. Keith, 44, is a small fry in the 2016 case, one that was marred by so many allegations of wrongdoing by FBI agents and their main snitch, John (J.R) Rubeo, that most defendants, even Philadelphia mob boss Joseph (Skinny Joey) Merlino, got lenient plea deals. On April 19, Allen quietly pleaded guilty to a minor gambling charge, with a possible maximum prison term of one year in prison.

Even so, the feds haven't treated Allen, an employee of a legalized gambling company in Costa Rica where he's lived for 20 years, and who was a minor, non-violent player in the case, as well as they treated mobster Carneglia. When the gangster showed up after two years on the lam — a month after Gotti's stunning courtroom victory, the feds dropped all charges, and he skated free.

It looks like Mileta (Michael Michael) Miljanic, the reputed leader of Grupo Amerika, a violent Serbian-American organized crime gang who is also a longtime Gambino crime family associate allegedly involved in construction industry racketeering, will be behind bars for the long haul.

The Manhattan U.S. Attorney's office took over the prosecution yesterday of the alleged $100 million ripoff of three Lottery winners by a pair of mob-tied defendants who are charged with getting expertise and assistance from the self-described Lottery Lawyer, Jason (Jay) Kurland.

Unless you get really lucky, and find a copy squirreled away in the wrong section of your local bookstore, you won't be able to get a first printing of Mob Boss: The Life Of Little Al D'Arco, The Man Who Brought Down The Mafia. But there are still some second print versions of the hardcover available as gifts or for your own reading pleasure.

Because of the heavy demand, Thomas Dunne Books went to the well again for a second printing of Mob Boss, the book that The New York Times called a "gripping, novelistic biography — a bulls-eye."

The mass market, paperback version was published in 2015. It is available online and at your favorite bookstores for about eight bucks. You still should be able to pick up a copy of the hard cover at your favorite bookstore, or, as Claude Raines might say to Humphrey Bogart, from any number of the usual online suspects: Amazon.com, Barnes & Noble and BooksAMillion, as well as an independent book seller near you.

Gang Land is a paid subscription site with no ads.